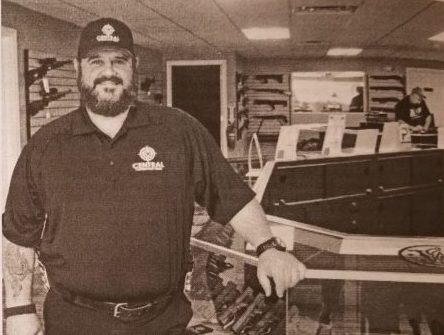 by Elizabeth Regan
A new gun shop in Portland aims to give customers a level of service that owner Rob Pizzi Jr. said is lacking in larger, big-box establishments.

Central Connecticut arms on Route 66 in Portland opened last month with a showroom full of handguns, long guns and ammunition and accessories.

Pizzi, an Army veteran who has worked in the car business for almost 30 years, send the lessons in customer satisfaction he learned selling cars and managing dealerships is what sets his new venture apart from the rest.

“I know how to build rapport with customers and listen to their wants and needs. These are all the things I think are missing from the gun industry,” he said from the gun shop last week.

Pizzi’s trajectory in the gun business began when he walked into an unnamed but well-known sporting goods store to buy a gun, he said. He waited about a half hour for help from a sales person who ended up being inexperienced, unknowledgeable and only interested in selling what he wanted to unload instead of what Pizzi wanted to buy.

“The moment I walked out the door, I said, ‘I’m going to be a dealer and someday open a gun shop,'”Pizzi recounted.

After getting his federal firearms license and selling guns out of his Wallingford home for about five years, Pizzi realized it was time to expand operations. He set his sights on Portland after looking into the demographics of the area and finding a dearth of gun store options East of the river.

He said a lot of gun owners and prospective buyers have to travel over the Arrigoni Bridge to get to dealers in more populated areas of the state.

“If I can keep some of that traffic on this side of the bridge, we might have a winning solution for people,” he said.

Pizzi said he keeps more than 300 guns in stock at all times. Right now that inventory includes about 140 Glock pistols because those where the most popular sellers when he was serving a clientele based in New Haven and Fairfield Counties.

He has since learned there are different priorities in his new location.

Another difference between the southwest part of the state and the more central and eastern markets is a focus on hunting that comes with larger expanses of private land.

“Every day, I’m trying to learn more and more about the people in the area so I know better what to stock to serve their needs,” he said. “I want to be able to engage everyone that comes in and not just try to sell them something I have on the wall because I want to sell it. That’s not part of my business model.”

Pizzi’s interest in guns grew alongside his grandfather, a World War II veteran who fought in the Invasion of Normandy.

“I wanted to emulate my grandfather, so what did I do? I joined the Army when I was young; I got into guns and hunting and fishing and all that. I always had a passion for, “he said.

Now, Pizzi sports a “We the People” tattoo on his right arm and an American flag holster on his belt.

He gives a 5% discount to active duty and retired service members and first responders.

“They paid enough,” he said. “We all paid enough, us veterans, so I want to give back a little bit.”

Pizzi’s growing clientele includes Portland resident Henry “Hillbilly”Orlich. On a visit last week, Orlich said he’s been stopping by every couple of days since he found out about the new business.

“The selection’s always changing,” he said. “There’s always something new, something different, something better.”

Before Central Connecticut arms came to town, the nearest gun store Orlich liked to deal with was roughly 40 miles away in Milford.

“Not only is it better that this one is local, but [Pizzi] is kicking their butt. The pricing and the selection has been much better,” Orlich said.

For pixie, one of the best parts of his new endeavor is watching customers come into the shop every day looking like his children used to on Christmas morning.

“That’s the look I get when people walk in the door for the first time. Their eyes light up, they’re all smiles,” he said.